Evaluating I’m a Scientist in Ireland 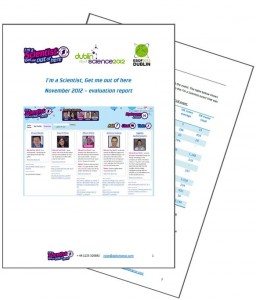 In November 2012 we ran I’m a Scientist in Ireland for the first time, during Science Week Ireland.

We’ve had Irish scientists and schools take part in the UK I’m a Scientist event, but running a dedicated Irish event is much more powerful.

We’ve collected feedback from teachers, students and scientists and used their responses and data from the site to evaluate the event. A summary of our findings and the full report are below.

This was the first time we’ve run I’m a Scientist in Ireland and it was a real pleasure.

1. The enthusiasm for the event shown by teachers, students and scientists was magnificent

The Irish science community really got behind I’m a Scientist. There was a lot of support on twitter before, during and after the event. We were oversubscribed with schools wanting to take part, and had to turn a few away as they kept applying right up until the event, when we’d filled all the class places. Teachers took to twitter through the event:

The scientists were enthusiastic, fun, sociable and engaging. They organised to meet over drinks to meet in the flesh. One scientist, Space Zone winner Paul Higgins, did a lovely interview after the event: sciencecalling.com/2012/11/23/primary-school-students-pick-top-scientists

The support from various institutes around Ireland was superb. We felt the event was greatly anticipated and we believe it met those expectations.

2. The students really got into the spirit of the event.

The students were very interested in the scientists themselves, with lots of questions about education and leisure pursuits. The themed zones encouraged discussions around that topic, from cancer, parasites and bacteria in the Health Zone to all areas of space in the Space Zone. The students really focused in on each scientist’s research area and asked questions about that.

The students were fun and a bit cheeky – this was picked up on by the scientists who often had fun with their answers.

3. We would love to run more I’m a Scientist events in Ireland. Hydrogen was the busiest zone in terms of the number of questions. There were lots of diverse questions and comments in live chats too. Interaction was high as students asked more questions in response to the scientists’ answers, and there were lots more personal questions than the other zones. There was a lot of flamingo chat because of Eileen’s research – a pleasant change from the normal topics asked about! The scientists were fun and very honest with the students, particularly Andrew on religion which the students seemed to appreciate. Space was a busy and fun zone – the live chats were energised and the students interacted well. The scientists were fun, quick and worked together very well. It felt like a big shared conversation with everyone joining in. The scientists answered questions while maintaining a level of fun and silliness, which was clearly enjoyed by the students with lots of “you’re a joker” & “you’re so funny”. The scientists wanted to answer every single question and really seemed to enjoy it.