‘We were amazed at how they (students) engaged and really got into the spirit of the event!’ – Teacher, November 2014

‘At times it felt like a mini science conference, only better hours and less mucking about with travel expenses’  – Ciarán O’Brien (scientist), November 2014

If this sounds like something you want to be part of, then… 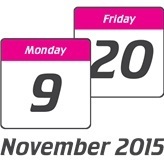 Teachers will get an email in early September asking them to choose their classes’ zones. The event is supported again by Science Foundation Ireland  and runs during Science Week. There will be:

The exact list of zones is still being decided and will be announced in the new school year. You can see what an event looks like by checking out the UK version that’s running right now.

The  zones are a mix of themed and general science zones in November, so there will be something for everyone.

The I’m an Engineer, Get me out of here event will be getting engineers and students talking during the same two weeks. Read all about it, and sign up to take part, here.

Posted on June 25, 2015 by in News. Comments Off on Take part in free science outreach this November!